MG Siegler of TechCrunch noticed something funny today. Linux and Microsoft were holding peace tweets! Well not exactly, but on the 1st of July Microsoft decided that it should start tweeting (finally?). The guy behind the Linux Twitter account, apparently a guy from Bangladesh, decided to welcome Microsoft on Twitter. 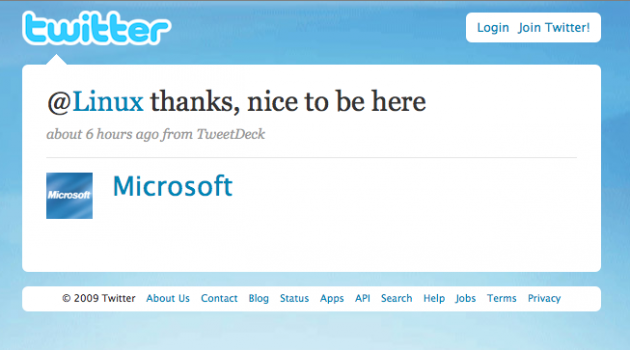 Cute huh? Lets just remember that these aren’t the CEO’s of both (well Linux doesn’t really have one, but its not Linus Torvalds). But rather some random guy from Bangladesh and some Microsofties who couldn’t care less about the tension between the two camps.

What I find striking is that Microsoft decided to start twittering only two days ago. As usual Open Source recognizing new and cutting edge technologies way before Redmond? ;)