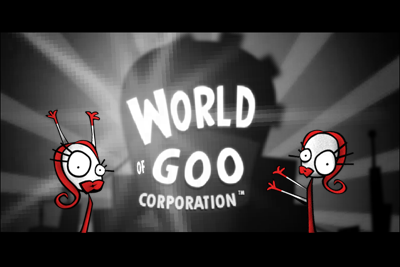 I consider myself a gamer. Luckily I am a console one, name the console and I probably have owned it. So I never really had to jump through hoops and Wine to run Windows games. Bar perhaps Championship Manager, but even that I quit since I discovered its such a time sucker.

Despite that, the news of porting World of Goo to Linux was refreshing. The more devs and hardware vendors who recognize Linux as a market the better. Eventually we will get to the tipping point and have mass recognition.

But to be honest, I never heard of the game before, the story was slashdotted which piqued my interest.

World of Goo was designed by a small team of two ex-Electronic Arts developers, Kyle Gabler and Ron Carmel, who [used their entire combined savings][1] of $10,000.00 USD to create the gooey game aimed at guiding goo balls to salvation.

I was skeptical actually, didn’t want to get overly excited only to get disappointed at the end. There was only one way to find out: download the demo.

All in all I was overly impressed, the game installed without a hitch and worked straight out of the box. Visually, the game was amazing and I loved the gooey eye popping graphics. It was a no-brainer for me, forking out $20 for this game was actually a privilege! Here watch it for yourself:

World of Goo is DRM free, meaning you can install it on all your systems with no limits. Sadly this also makes it wide open for piracy. I really do hope that people will do the right thing and actually buy this game, after all we already have discussed how piracy actually hurts Open Source, and we don’t really wanna do that now do we?

Gaming is Linux’s Achielles heel, and it is one of the main reasons a lot of people are steering away from it. “It won’t play my games” a lot would lament! But you know what? No developer really thinks of Linux as a viable market. Luckily World of Goo gave us Linux users a chance to dispel this myth once and for all. According to the developer’s blog:

It’s only been 2 days since the release of the Linux version and it already accounts for 4.6% of the full downloads from our website. Our thanks to everyone who’s playing the game on Linux and spreading the word. Here are a couple of nifty stats:

So if you care about Linux, do the right thing and buy the game.