Digg is a social news website, it helps people discover and share stories they like. Users vote or “digg” the stories they like and if a certain story gets sufficient votes it is promoted to Digg’s homepage, driving hundreds of thousands or even millions to the promoted story.

I have been on Digg for almost a year and a half now, and have witnessed at least 4 so-called revolts. From top contributors revolting against changes in the promotion algorithm to revolts against top users like MrBabyMan. All these “revolts” have one thing in common they all died quickly, and changed nothing. In Digg’s history there was only one revolt that really brought real change and thats the HD-DVD revolt. Though some might argue the 2008 January revolt conceived Digg Townhalls, but really what change did that bring?

Diggers couldn’t let 2008 die peacefully, they had to stage a revolt. Apparently a user from New Zealand that goes by the name Raisedinhell was pissed because another top user duped his submission and stole all his “glory”. He took a screenshot of his submission being clearly duped by Pavelmah, another “Power User”. Raisedinhell’s submission gained traction and finally got his first front page story (isn’t that what he wanted all along?) This story spawned an amazing response, and true to Digg’s annoying mob mentality, everybody jumped on board. A video showing top users profiles and how they digg their friends story too quickly or “blindly” also hit the front page. And to top things off, a user submitted a petition asking for change, titled “Digg this if your sick of power users stealing stories.” Even Kevin Rose, Digg’s founder, was compelled to comment on the whole fiasco.

The allegations were simple:

Each of the two allegations have major flaws in them. For one Digg’s own dupe checker is severely flawed, by Digg’s own admission. While there is no doubt that some users dupe others intentionally, its preposterous to claim that it’s the norm. I might be labeled a “power user” by some, and cannot even count the times I backed out of dupes once the dupe checker picked them up.

The second allegation is even more ridiculous! Everybody uses the site differently. Some might use Digg for bookmarking, quickly digg what they want to read later in the day or week. Others could open all their friends’ stories, read them, and quickly digg them once they are done. Finally others might click through the stories they like, while digg other stories without actually clicking through simply because the story doesn’t interest them but added to their reservoir of knowledge. I for one don’t care if the iPhone 3G got hacked since I don’t own one, but still the Digg title and description is sufficient to add a little tidbit to my knowledge to warrant a digg.

Being through many revolts before, I quickly shrugged it off knowing that it will soon fade away. However around 4 AM today, toying with the idea of going to sleep, I got a weird message on gtalk from Brian, aka Brainovate. He was complaining about Raiseinhell’s attitude and comments in a certain Digg thread. The message wasn’t intended for me, and Brian has mistakenly typed in the wrong window. I didn’t really understand what he was saying since it was out of context, but he apologized and went on to explain and shared with me the thread. Apparently Raiseinhell wasn’t content with the 15 minutes of fame he got, and lusted for more. He created a web app that monitored top users diggs, and showed how quickly they dugg stories. He even submitted the page to Digg, and started bickering and whining about the whole issue. Normally this didn’t sit well with me, he was taking it a bit too far, and thought I should give him a taste of his own medicine.

So I fired up a new Firefox window and navigated to Raisedinhell’s submission page and started combing through his submission looking for stories he duped. Lo and behold, exactly 14 stories down I already found 5 dupes. I quickly photoshopped (or rather Gimped) the dupes and submitted it to Digg. 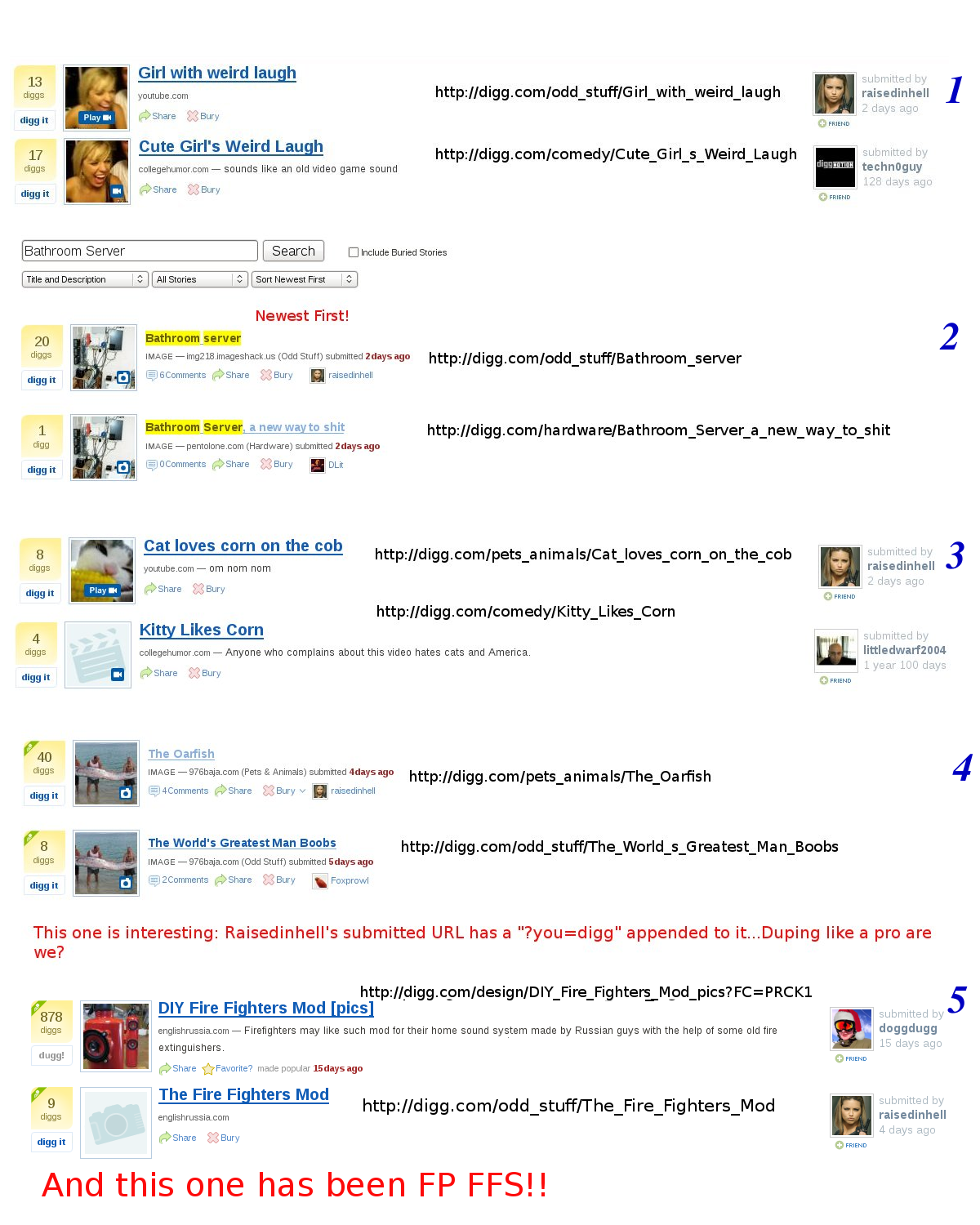 Most interestingly, dupe number 4, is a REAL dupe. The dupe checker DID pick it up, but Raisedinhell decided to submit it nonetheless. He tricked the dupe engine by appending “?you=digg” to the URL, effectively tricking the engine to think its a different URL. Karma is a bitch isn’t it?

All I needed to do was IM the story to around 6 or 7 of my friends, and it spread like wild fire. It gathered 20 diggs in 5 minutes, and almost 50 in less than half an hour! It even got better when Raisedinhell popped in and started defending himself with the same arguments that he dispelled 1 day ago…ahhh the irony.

However all good things come to pass, the story got dugg around 120 or 130 but Digg decided to yank it out of the upcoming section. Dooming it to never see the light. The truth was suppressed while lies, deceit, and libel got all the “glory”…so hypocritical of you Digg!

Currently the story is still gaining diggs with 255 diggs and its not even in the upcoming section! Diggers wanting the truth to come out tweeted and IMed this story like hell.

Update: Apparently Raisedinhell is not done whining and bitching, he just submitted his page tracking Pavelmah’s digging record. The sad thing is that he lost all his credibility. His stock is going down faster than the Dow. Do him a favor and put him out of his misery, bury him! Some people never know when to quit!

Update 2: Just found out that Raisedinhell responded to all these allegations on his website. He says that Pavelmah duped him and only removed “Yahoo Answers!” from the title. Well guess what? It was submitted before you on Reddit, with your same title! So is it not plausible that Pavelmah picked it up from Reddit just like you did? And him being an experienced Digg user removed “Yahoo Answers!” from the title, which makes a lot of sense, and shows understanding of the Digg community.

Also he goes on saying that he intentionally duped only one story because it was ridicilously titled. First off, who are you to judge if its an appropriate title or not. Second, you are a “pro” duper just for the fact that you appended the URL, I am willing wager that 90% of Digg users don’t know about that hack. That would put under the “pro” category in my book. Again, BURY this dude .