Google is a wonderful tool. No I am not talking about how it helps us locating the information we seek, unearthing valuable gems. But rather how it reveals trends. It’s only logical, the more people are searching a keyword the more revealing of current trends. A pretty simple and straightforward hypothesis.

So it’s only normal for me to get excited about a Google Trends graph I discovered revealing that Ubuntu gaining on Windows (both Vista and XP) in terms of Keyword searches. I even submitted it to Digg titled “2009 the year of open source : Ubuntu FTW” with an even more overzelous description: “pssst…Microsoft, there is a boogie man in your blind spot ;)” It is currently sitting 3rd in the Linux/Unix upcoming section with 76 diggs and 11 comments. 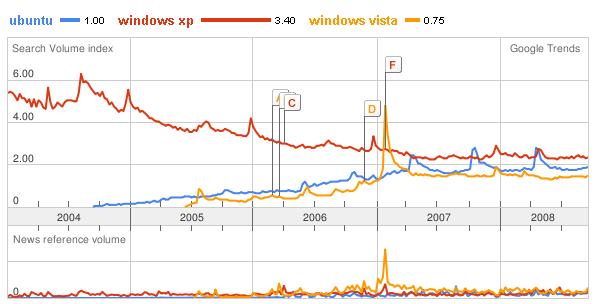 An interesting discussion ensued soon after. Ynot82 was quick to point out that removing the word “Windows” from “XP” and “Vista”, drew a very different picture, a very bleak one: 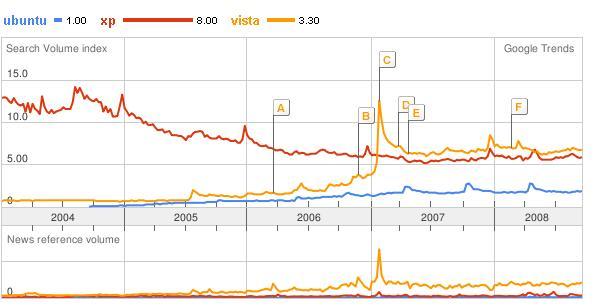 kd420 argued that 90% of all Windows OSes come preinstalled, so there is really no motive for people to actually Google it, as it “just works”. Personally, I would argue that the fact that it comes preinstalled doesn’t mean that people don’t face problems day in day out. I mean installation problems are probably only a small part of the Ubuntu searches.

We still haven’t thrown in Macs into the equation, but once we do, we probably can draw up 101 graphs, each to its own conclusion. One thing is for sure, these 101 graphs will be served on a silver platter to Digg once this story goes popular!

Update: The story DID go popular! Only to be buried (or pulled by Digg admins) a couple of hours later, but it gathered almost 90 comments, some are interesting, be sure to read them :