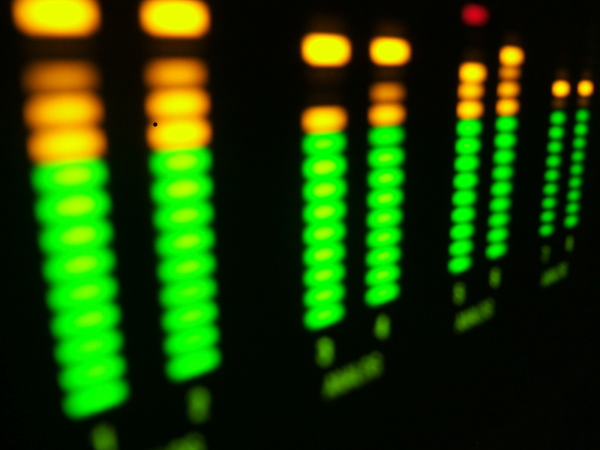 People who either dabble or work in computing enough are probably used to the idea that some operating systems are better than others as creative platforms; Mac OSX generally seems to be the preferred place for video editing, thanks to the likes of Final Cut Pro. They’ve also got the fantastic GarageBand program for audio production as part of their iLife suite, and with Windows, ProTools is often considered industry standard when it comes to audio production. But these popular, household names of programs come with a price; often a pretty hefty one, actually. If you’re thinking of getting SONAR 8 Studio for your audio needs, be prepared to shell out $369 for it. Today, we’re going to explore how with Linux we can make music, and from a software standpoint, it’s going to cost us nothing.

Now, when I’m not designing websites with Kompozer or writing articles like this on OpenOffice.org’s word processor, I love playing and listening to music; more specifically, I love heavy metal. I’m an avid fan of Death, Cynic, Opeth, Nevermore and Megadeth to name but a few, and I even played in a death metal band a few years ago. I suppose a few of you are rolling your eyes already, but bear with me, this is going somewhere.

Metal music may not be exactly everyone’s cup of tea but if there’s anything we could all agree on, it’s an extremely intense, technically complex and physically demanding style of music — A perfect guinea pig for pushing an audio production suite to its limits.

An obvious place to start is looking at the numerous Linux distros out there that are specially tailored to multimedia production. Jacklab Audio Distribution, Ubuntu Studio and Musix GNU+Linux are all great examples; once you have them set up, you’ve already got everything you need to get to recording, once you have all of your required equipment. While all of these distributions have their own arrangements and unique quirks, they’ve got a few common threads in the software they use.

Drumming Without a Drumkit

With most music it’s preferable to record real live instruments with skilled musicians behind them, but that’s not always a viable option — be it for financial or practical reasons. I’ve always been a bassist primarily and guitarist when needed, but when it comes to drumming I’ve no equipment and really, no clue either. All I know is how I want my drums to sound.

Enter Hydrogen, the free, open source advanced drum machine built for Linux. It comes bundled with a good variety of pre-installed drumkit sample sets, all modifiable and expandable. After you’ve chosen a drum set to use, you’ve got a pattern editor. Drum patterns can be as fast or long as you desire; from there, the program’s song editor can be used to string multiple patterns together to create a complete drum track for use in a song, which can then be exported to WAV for any other program to use. 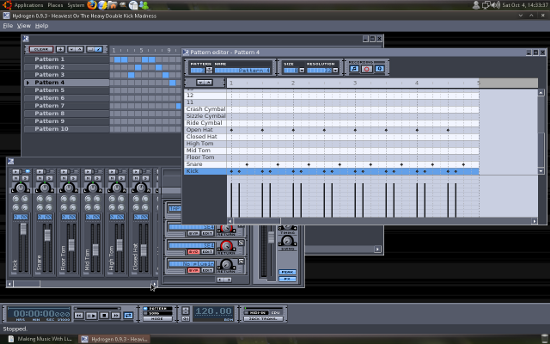 Each individual drum can be configured with volume and balance, and have four different effects applied as well. The program comes with a decent set of effects from compression to reverb, all very much required to get your drums sounding just the way you want it. Finally, I can add that Hydrogen has abilities to ‘humanize’ the drum tracks so they sound a little more random and less machine-like.

With this setup, I was able to produce recorded drums that were blistering fast and decently complex, crisp and clear. Perfect for use in my song.

ProTools is the most commonly heard-of program for controlling recording and mixing, and the Macintosh’s GarageBand has received it’s fair share of attention too; but they’re not the only ones. We’ve already got Ardour, a complete audio workstation, capable of recording, mixing and editing.

The drums are the backbone of my song, and provide the framework that everything else builds on. So, it’s a simple matter to import my drum track that I produced in Hydrogen. Then, I can get to producing the rest of the song.

Sealing off one of the rooms in my house and then padding the walls to reduce echo, (the last time I recorded a demo, we actually used old mattresses – talk about quick and dirty) I hook a microphone up and set it down just in front of my Peavey guitar amp, plug in my BC Rich and from there I can record my guitar tracks through Ardour. Once that’s done, I mic up my bass amp and record my bass tracks with my ESP bass. Finally, all that’s left is my vocal track to record and then my fully recorded song is sitting there in Ardour.

Ardour can be used to mix the tracks together and fine tune every aspect of each sound, so with a little messing about, it’s a fairly simple matter to add some strange and fancy effects where you like, and the end product is a 100% finished song. Sure, the vocals are probably going to sound like a screeching parrot, but don’t blame the software for that. Blame my voice!

If you’re after some testimonials to the power of this software, you can see for yourself by checking out the Ardour Forum’s “Made With Ardour” section.

Getting It Out There

Back in the old days for aspiring young artists, the only way to really get your name out there was by word of mouth, playing your heart out on stage whenever you got the chance and generally working full-time to get yourself noticed by a record label who’d redistribute your music and provide resources for recording high quality audio for them to put out. Now these days, with software like Ardour making the rounds, the power to create high quality audio is already in our hands – and the internet can be our tool to get our music out there for everyone to enjoy, and potentially even kickstart a career in music.

For example, US deathcore act Job For A Cowboy got themselves signed to Metal Blade Records last year, and I actually saw them when their world tour came down to Adelaide, Australia. But these guys started out from producing their debut EP, Doom, by themselves, and their only promotion was through Myspace, a method that anyone could follow for free.

Taking the concept of internet distribution further, the legendary industrial band Nine Inch Nails dropped their label completely now and self-release all of their material through their website. In addition to that, their new albums can be downloaded entirely for free and the band even provides individual tracks from their albums to be remixed by their fans at will. The band is taking steps towards making their living not primarily from record sales and royalties, but instead from touring and merchandising. The music is just reduced to what it should be; the essence, the glue holding everything together.

These are but two small examples of a much larger change that’s seeping through the music industry. The power of the internet and the ability to share information freely is giving more and more power to the individual user, and with it we’re starting to witness a kind of renaissance in the way we distribute and produce music. Record labels are increasingly finding it hard to keep a foothold in the industry and the power to create trickles more and more into our fingertips. It’s a gradual shift, but it’s visible if you know where to look for it, and it’s just the tip of the iceberg.

With what we’ve got available now, for nothing, the sky really is the limit. The only thing that can stop you now is your own imagination. That’s a line we’ve all heard plenty of times before, but for once, perhaps we can say with confidence, that it’s really true.