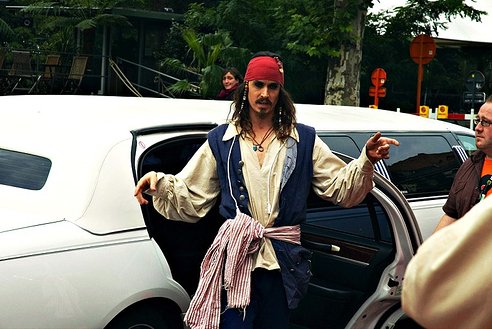 In an earlier article we established that piracy of software is basically a given in today’s world where information is so easily shared and duplicated. We also established that no matter what DRM measures are implemented by commercial software developers, no matter how advanced or how draconian they are, someone’s always going to find a way around it. With that in mind, perhaps, if we’re able to figure that out, surely so are they…?

Epic Edits Weblog, through their own original research, discovered that very nearly 60% of their poll participants were using a pirated version of Adobe Photoshop. That’s a good deal more than half of them, which means more than half the copies of the program among that sample are illegitimate ones that didn’t come from Adobe themselves.

Indeed, I’ve installed Windows copies on many peoples’ computers, with the CDs they themselves have provided me. I have yet to see one that came from a boxed, retail copy of Windows. While it’s a point that gets often awkwardly tossed aside in discussions among IT folk, it’s true; widespread software piracy isn’t just some peculiar phenomenon trickling into our society, it’s the norm.

I’m willing to bet a good few of those reading this blog are using pirated software, and, until I switched to Linux last year, I myself was quite content to be one of those few. After all, who’s going to keep tabs on you closely enough to send the police kicking down your front door because you’ve got Deluge downloading Office 2007? But, when you hop on your favorite torrent site and then have yourself a copy of Adobe’s entire creative suite within the hour, you may not be aware of all the implications that using pirated software could have in the software development community.

It seems a somewhat common attitude I’ve seen among people; they’ve got an axe to grind with the bigwigs like Adobe or Microsoft, and then thus choose to pirate their software as their quiet little way of ‘sticking it to the man’. It’s easy to understand that mindset; if you download the program illegally instead of paying the company for the right to use it, they’ve lost your purchase there – these rich corporations are charging hundreds for a program that’s hardly worth a fraction of that price, so if you pirate, they’re just getting what they deserve! (Gleeful cackle) 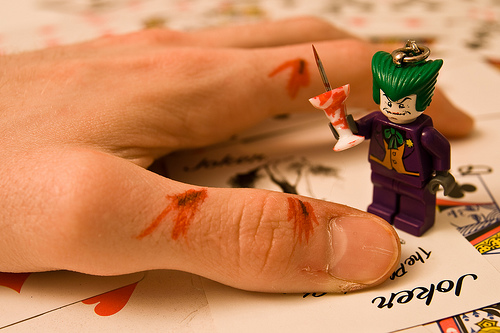 Caption: Stick it to the man!

Microsoft chairman Bill Gates, in response to the massive degree of piracy in China of their Windows operating system, has been quoted as saying that “while it was terrible that people in China pirated so much software, if they were going to pirate anybody’s software he’d certainly prefer it be Microsoft’s.”

And it’s interesting to think of the fallout from this. A commercial software company would certainly prefer that you pirate a version of their software, rather than avoiding it altogether. While they’re making less money, they still have your support in using it, and that often leads to more revenue for them down the line.

Adobe’s products are a good example, especially their Photoshop program. If you look in a newspaper for job advertisements in the field of graphic design, illustrations, logos, or anything of the like, you’re likely to have seen that an employee must be familiar with Adobe Photoshop and/or Illustrator. When I was a student of TAFE in Australia, the programs we were using were Adobe programs, and with good reason; Adobe Photoshop, Dreamweaver, Flash… these are all industry standard programs. So even if something better becomes available, people will still be using Adobe, because it’s the industry’s standard. Most of my student friends were using pirated versions of Photoshop at home because they couldn’t afford the real thing, and because it was what they were learning to use in class. I showed a few of them the benefits of using GIMP instead, and the response was total rejection of GIMP. It was unfamiliar, it had no perceived benefits over Photoshop, and most of all, it wasn’t even any cheaper than a pirated version of Photoshop.

It makes sense, that if they’re going to continue with their careers and don’t want to land themselves in hot water for using illegitimate copies for their own commercial endeavors, they’re eventually going to shell out that $800 for it, as a few of these friends of mine have already ended up doing.

The lesson is, that even if you haven’t yet paid for the use of the software, the company may well have already sold it to you anyway. You contribute to upholding the industry standard, and then you’re halfway to doing Adobe’s promotion for them.

Microsoft Windows hold 90% of the desktop market, and for much the same reason. It’s what most people are used to, and that goes a long way to securing many more sales of Windows for more and more prospective computer users. Microsoft don’t desire losing money through piracy, but in the long run, they more than make up for it by having their product supported by pirates and legitimate users alike as a product that’s accepted by the mainstream market.

We’ve all heard plenty of spiel from software companies lamenting the disadvantages of using pirated software, but often while they come up with valid points, they’re often only points that are in their interests. Adobe moans that covering for pirated software hurts the global economy, leading to losses of jobs, legitimate users where money that could’ve gone into R&D instead goes into simply keeping the company afloat, and finally users of pirated software due to often (sic) defective or virus-laden copies circulating on the net. 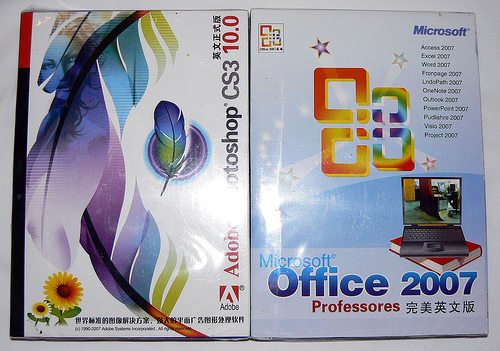 While the validity of that last point there is certainly up for grabs, there’s other, less documented implications that are especially relevant for proponents of Free and Open Source Software.

Firstly, legitimate users are certainly losing out; prices raised up due to piracy (or using piracy as an excuse, as the case may be) leads to legitimate customers paying more to use the product; effectively meaning that they’re paying for pirates to use the software without paying a dime.

How FOSS Is Feeling It

But there’s also going to be an often unseen impact on FOSS developers; FOSS isn’t about generating revenue, but public interest and user support is the FOSS community’s lifeblood; if you choose to download a copy of MS Office 2007 instead of OpenOffice.org, OOo’s developers have lost a user, lost a supporter and possibly, lost a contributor. Louis Suarez-Potts, community manager for OpenOffice.org, hassaid as much himself. 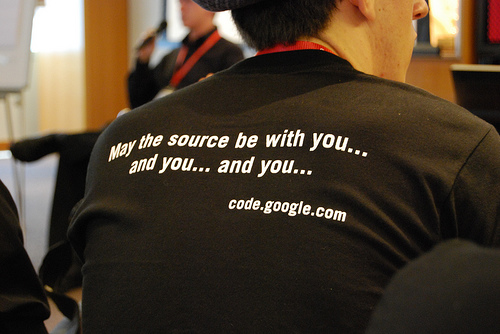 Customer support is a goal that both free and corporate developers have in common. A customer that chooses to use Kompozer over Dreamweaver, is a score for the open source community that now has a supporter, and a loss for Adobe, who’ve lost a potential profit.

Even the spread of trial or ‘stripped-down’ versions of commercial software will be making an impact on the FOSS movement; if you’re using Photoshop elements, you’re still doing Adobe’s word-of-mouth marketing for them, and then potentially drawing in more customers for them, while free alternatives are never even explored. If too much of the userbase goes to a single company, that gives them an opportunity to put a stranglehold on the industry.

A good example of this is Adobe Flash; as of right now Flash remains a closed format, and the *only *way you can competently develop Flash at the moment is with Adobe’s software. Basically, Adobe has established a monopoly here, and there are almost no alternatives at all (besides, perhaps, OpenLaszlo, in a very limited kind of way). If you develop with Adobe Flash, whether it’s paid or pirated, you’re going to be supporting Adobe and tightening their hold on this standard in the industry.

The lesson to be learned here is that any proponent of free software shouldn’t have any interest in using pirated software; if the best choice for you is to pay for the real thing, then so be it; but if one’s really interested in ‘sticking it to the man’, or at the very least doing your part to promote the virtues of free software, then the best way to do it is to hit them where it hurts; not just the hip pocket, but their mainstream credibility. If that credibility goes instead to open source developers, that puts them in a position to make something that outshines the competition for everyone. And then, no one’s going to have to pay for it.

If one can make it known to all that the support of these industry giants isn’t needed, that’s when some real difference can be made.