Author’s note: I was intending to research and write a piece on how Linux is being used as an mp3 player in cars. I’ve owned a Linux based mp3 player for six years. I was assuming it was not the only solution. It’s not, but as of the fall of 2008, buying a Linux-based mp3 player for your car is not super easy. 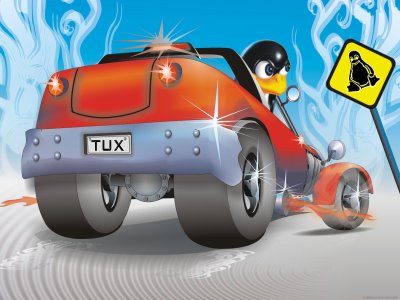 If you’ve just started using Linux, you’ve probably noticed an interesting phenomenon. You’ve entered a group of rugged individualists, non-conformists, people who know how to pull things apart and put them back together, people who don’t like being spoon fed. There’s plenty about Linux and the various desktops and applications in open source that’s easy and fun to use. But real Linux nerds prefer rolling up their sleeves and getting their hands dirty.

One branch of this rugged individualism, so to speak, is running Linux in different environments. Just using Linux in your PC? Ok, that’s pretty good. But how about building a Linux system from scratch? Or on your phone? Even better, how about in your car?

Using Linux for other things — not just as a stereo — in your car is possible, of course. You can connect in with the OBD-II (On-Board Diagnostics II) interface to the car’s sensor network. This interface has been required on all cars since 1996 and produces quite a bit of data on the functions of the car.

Sometimes this is called a “carputer.” Though a little dated, mp3car.com has a good “Car Computing 101.” Linux may become the operating system of your car in the near future, but that’s probably out of the hands of hobbyists.

Not for Mere Mortals

First, let’s get the really geeky, really great stuff out of the way. Time Killer is probably the pinnacle. The TITLE tag on his web page says “The Coolest Car in the World.” In this case, I would hardly say that’s hyperbole. Time Killer built the Linux car stereo from scratch, modified his dashboard, and put it all together with a touch screen monitor.

There are some other great Do-It-Yourself sites out there as well.

In reality, the quick answer to “Can I put Linux in my car easily?” would be probably… no. Please prove me wrong! But I’ve been using Linux in my car for years, and I’m pretty much a hardware lightweight. So you know where there’s a will, there’s a way.

Homage to the Empeg

The Empeg was, I believe, the very first mass produced in-dash mp3 car stereo. It was called the Empeg Car, and it was first shipped to customers in 1999. It was a fully functional Linux computer that had a “sled” that was mounted in the single DIN slot in your car, just like a pull-out car stereo. The computer’s main display was set to handle playlists and all sorts of information about your music. The faceplate lens was, by default, the blue color, as pictured here.

Lens kits, which included green, amber, and red lenses, were sold separately. In Silicon Valley, car stereo installation places generally knew of the Riocar and would do the installation. Whether they knew it or not, installing a sled and connecting good speakers and a sub woofer was not advanced work for them.

In November 2000, Empeg was acquired by SONICblue Incorporated, which continued to market an updated version of the car player – the Rio Car – until it was discontinued in January 2002. The total number of existing players in the world is about 4000 players.

It was right about this time that a friend told me he had an extra one, and I could buy it. They were considered really good mp3 players but generally too expensive. Somewhere in the range of $800 – $1200. But because they had been discontinued, the price had dropped. I paid $400.

You can still buy an Empeg Riocar at Amazon and other places. But it is often not available, so you’ll probably need to set an alert and keep checking.

Today, there’s a slowly fading but still committed Empeg Riocar owner community. This is Linux after all. The community is the real strength. The version of Linux used in the Empeg Riocar is called Hijack and it is hosted on SourceForge, the famous open source projects repository.

Disk drive size varied depending on the model. All models below 60GB were single-drive models, leaving one of the two bays free for the addition of a second disk drive. A lot of my friends added extra disk drives, though I settled for the 20GB. That is, actually, a lot of space for your music.

The player did not come with a radio tuner. An add-on AM/FM/RDS radio tuner module, that installed inside the dashboard behind the docking sled, was sold separately. One DIN-sized car docking sled with four 4v line-level outputs (stereo front/rear) and two line-level aux inputs (stereo). One AC adapter for using the player indoors. One USB cable for loading songs into the player. Here’s a great summary of the different model specs. And extreme details here.

It’s tough if you specifically want to run Linux in your car and are looking for a ready-made product. There is nothing like that being sold currently. But with some digging and some effort, there are Do-It-Yourself projects or discontinued products that still have active support communities. The bragging rights are worth it!