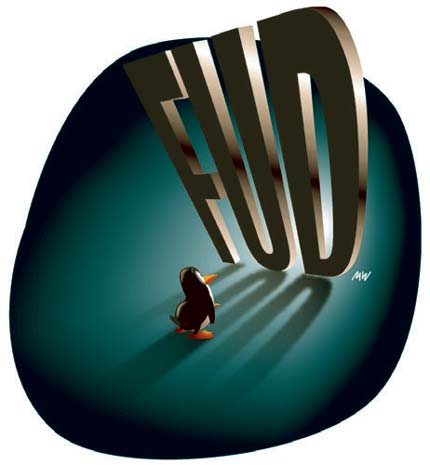 If you enjoyed this article, then I would recommend to also read The 7 Habits of Highly Effective Linux Users and Etymology of A Distro. Enjoy!

When it comes to Linux there are 4 kinds of people, those who never heard of it, those who love it, those who are afraid of it, and those who hate it and spread falsities about it. I don’t really care about the first, they probably aren’t really technologically literate anyways, as long as they have E-mail they are content. While the third group is the result of the actions of the fourth. Let’s hit two birds with one stone shall we?

It is widely argued that Linux is more secure than Windows just because Windows is more popular, so hackers and virus coders tend to focus on the more popular platform. Actually, this is just one side of the story There are so many other things running for Linux security-wise that totally dispels this myth.

First of all, let’s face it, YOU are the weakest link in any OS. The user is the one that wreaks havoc to any OS, with ignorance or miscalculated decisions. Linux users are generally more savvy than the Windows or Mac users out there. We don’t just click on files promising us the latest Hollywood diva nude pictures. Besides, it’s normal practice that Linux users don’t run their systems as root, which is not the case with Windows, this drastically brings down the vulnerability of any system. The question now, will this be the case if Linux gains popularity and more adoption? I don’t really know, but if Linux commanded more than 90% of the market, I believe this argument would be totally false.

Linux with it’s Unix roots is built as a Network Operating System (NOS) and now advancing slowly as a Desktop OS (DOS? ironically). This simple fact helped Linux carry on the legacy of network security model of server/client-user with limited permissions. Whilst an OS like Windows was originally built as a single-user Desktop OS advancing into a NOS and adding security layers on the go.

Finally, just the fact that Linux is Open Source means that more eyeballs can see bugs and vulnerabilities making it easier to patch. Any coder in his/her mom’s basement could issue a fix for the community. It doesn’t need a big fat layer of corporate bureaucracy to issue a fix! Granted that the corporation gives the security flaw enough attention.

2-Installing Applications on Linux is Hard

Well this might have been true in the early days of Linux, but currently it can’t be farther from the truth. As a Linux user, what do I have to do to install an app? Let’s assume I want to this in a a GUI only environment (some get turned off by the mere mention of a command line, for some reason beyond me.) All I have to do is launch the graphical frontend of my package manager (think of it a big ass repository of applications stored on a server some where), then search for the app in mind. Hell if you don’t know the exact name of the application just search for the function! For example if you want to install a Gmail alerter, just type “google” or “gmail”, a plethora of apps will appear, then tick on the one you like and click ok. The package manager will automatically download the required files from the Internet and install it, and place it in your menu!

On the other hand, if you want to install an app on Windows what will you do? Generally you will head to Google and search for the required app or function, swim through hundreds if not thousands of results, randomly choose one which might or might not have what you want. If it does you will be probably asked for a valid email or enter a captcha, then download the file. The file might be huge and if you don’t have a download manager you might lose all what you downloaded because your wireless abruptly decided to disconnect. There are 101 scenarios! If all goes well you double click on the app, click next next, tick on “I Agree”, a couple more nexts and you have the app. Which turns out to be a stripped down trial version, that added a couple of more apps that you didn’t ask for on your desktop and changed a few of your system settings!

Which is easier again?

3-Linux is A Nightmare to Install

Back in 2005 when I first started my Linux adventure, I got my hand on 5 SUSE cd’s from a Linux Format magazine. Back then I was on XP, I initially wanted to back up my files before I take the plunge just in case. When I looked at the huge amount of files, I got lazy and somewhat careless, and decided just to install SUSE without backing up. 2 hours later I had a magical dual boot system (the whole concept of dual boot was alien to me back then) and all my files were intact!

Why am I telling you this story? Because I think one part of the intimidation of installing Linux is the belief that it might destroy files and end up on an OS that might thats not appealing (hey we are humble to realize it’s not for everyone !;) ) All I am saying it’s piss easy! If I was able to do it with no prior knowledge of Linux then you can too! It just needs some common sense. Trust me!

And if you don’t trust me (I understand you don’t really know me do you?) Why don’t you dabble with Linux using virtualization?

Anyways the whole installation process has been tuned over the years. Distros like SUSE, Ubuntu, and Fedora, are so easy to install it would literally take around 30 minutes to get it up and ready. With almost all the apps a default PC should have. Thing like an Office suite, media player, PDF reader, chat clients…etc Can you really say the same about YOUR system?

4-The Linux Interface is Ugly and Unattractive

Well it depends on the definition of “attractive” doesn’t it? A command line only OS might be a turn off for most people but bliss for some. An interface with wobbly windows, rotating cubes, spherical desktop, fireworks, rain, snow…etc is bliss to a lot and a resource hog to some.

Well Linux provides you both and everything in between! And in a million and one styles!

You can install Compiz, which gives you rotating cubes for different desktops, wobbly windows, animated window behavior just to name a few. You can install Enlightenment, which provides you a sleek looking desktop that you have never seen before. KDE4 is a scene to behold! Anyways I think a picture is worth a thousand words, here judge by yourself: 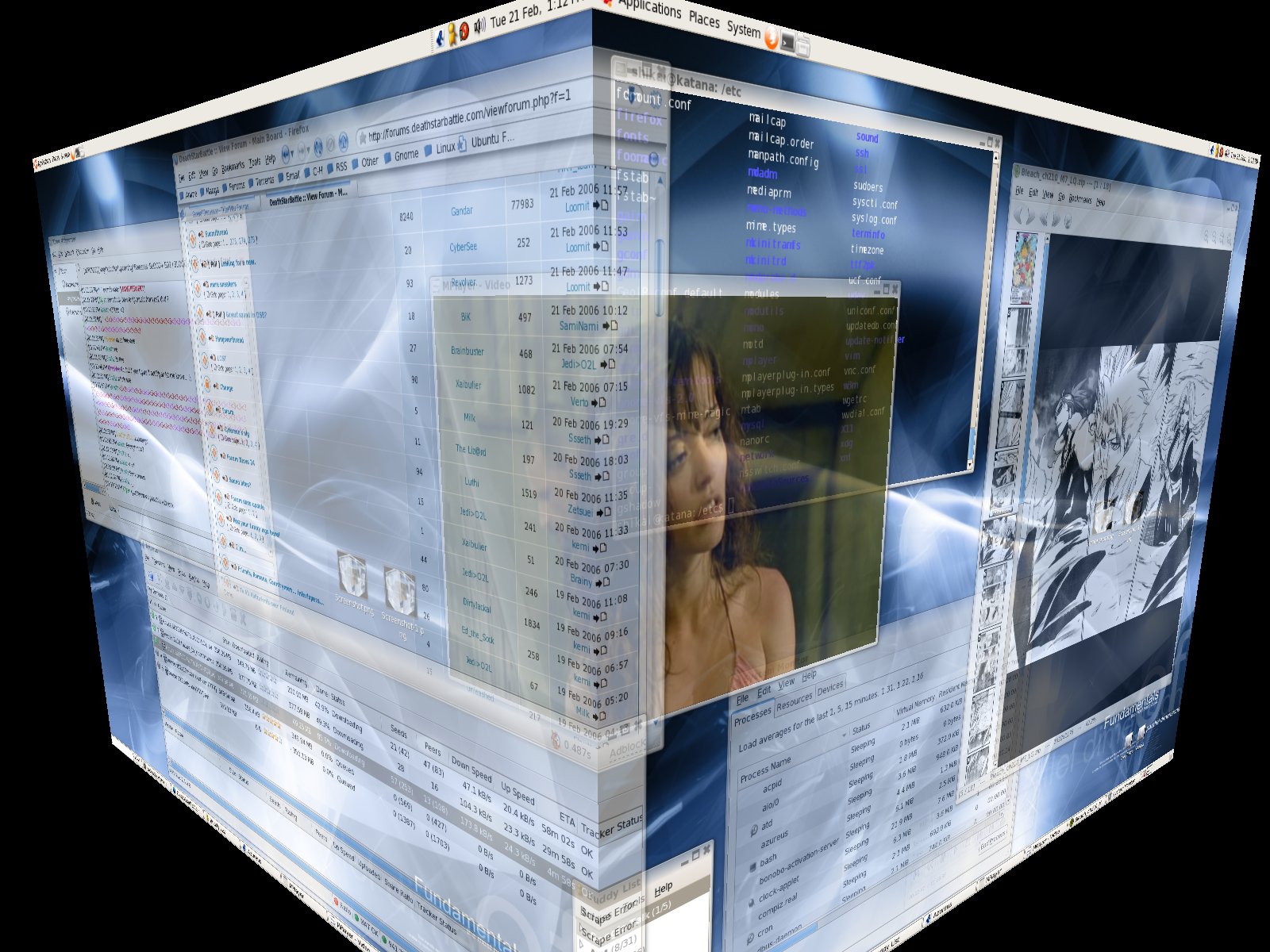 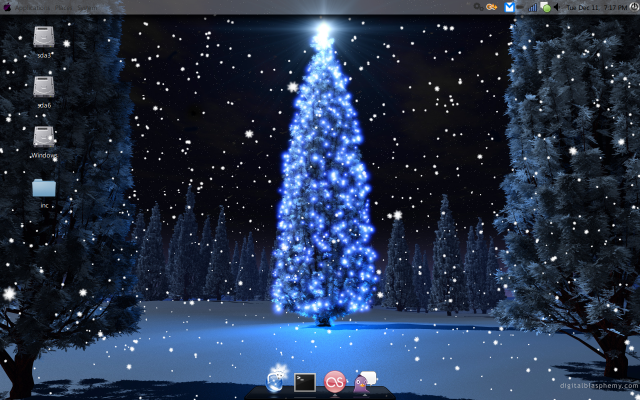 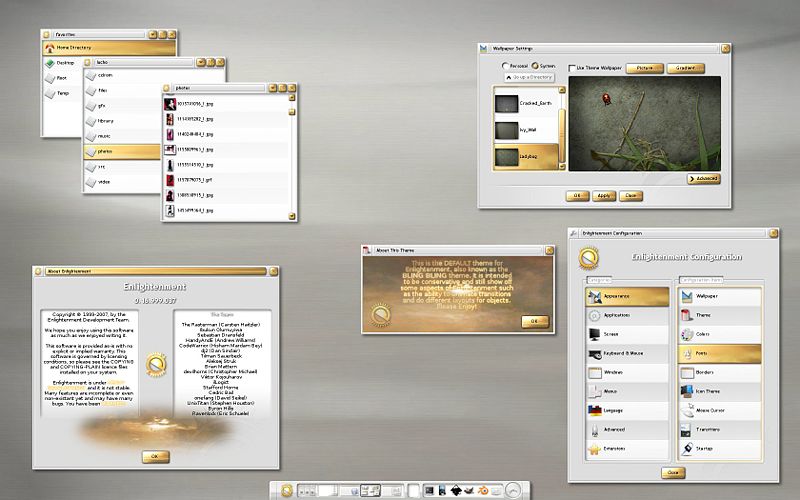 In fact you can actually make Linux like whatever you want, you can make it even look like Apple or Windows! The sky is the limit !;)

5-There Are No Games on Linux

Actually I am not really a PC gamer, I tend to keep my gaming activities on consoles, but I once installed Football Manager under Linux, worked perfectly.

Seriously, just yesterday I walked into my brother’s room, and found a collection of PC games on the floor. Me knowing that he uses Linux exclusively, I raised an eyebrow and asked “under Linux?”. He replied positively, “without a hitch!”

Today, there are literally 100’s of games that work under Linux, true they haven’t been ported, but Wine (a program that allows Windows programs to run under Linux) has taken care of that. Just looking at the top 10 list of apps working under Wine, one finds quite a lot of them are games. And a lot of them are VERY popular! Wine could also help in a lot of other games too! You can also purchase Cedega which depends on Wine but makes the experience much more user-friendly. There is a lot of help out there, you just need to open your eyes a bit! And if all fails, virtualization could be a last resort! 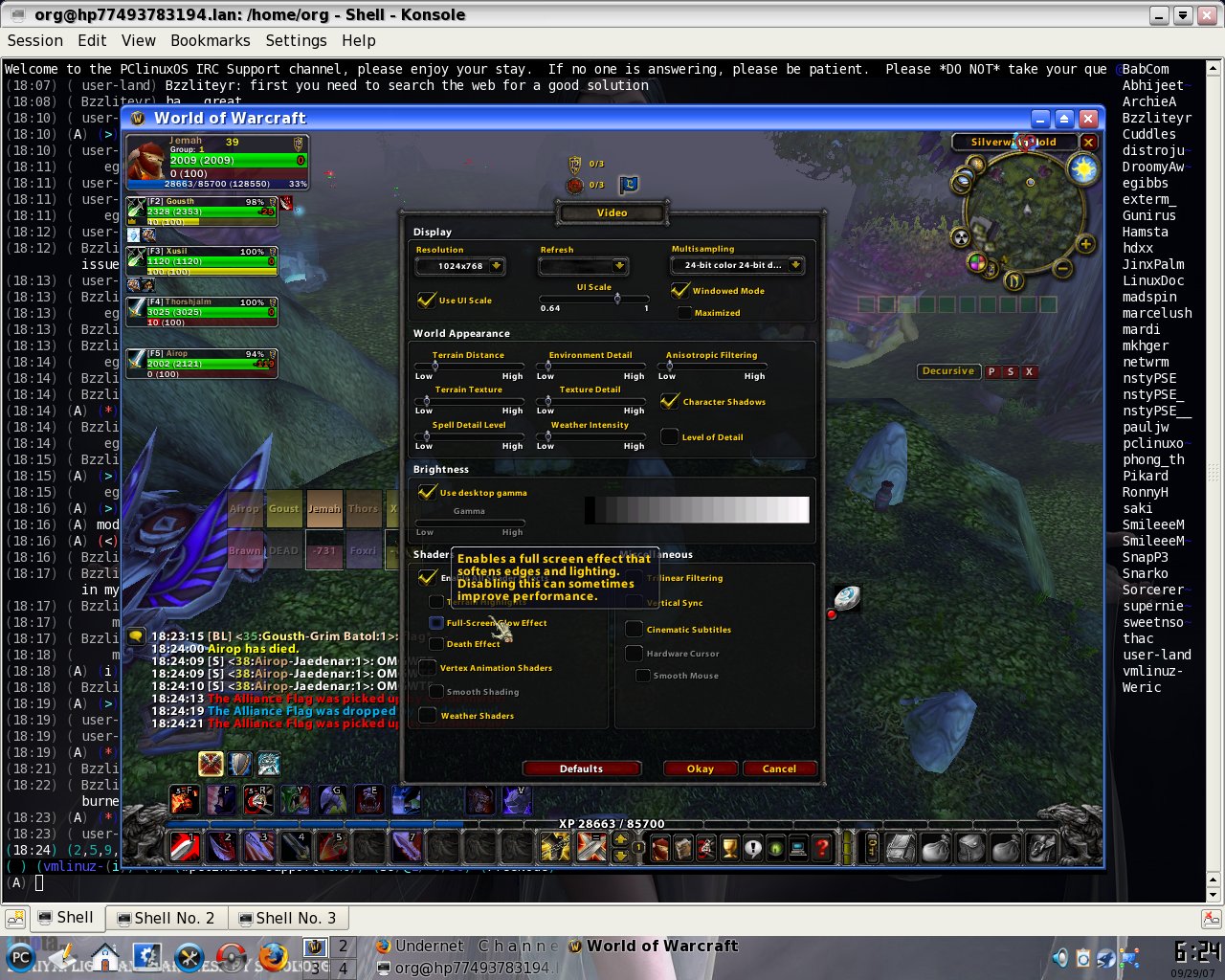 Whoa! You have been contaminated with a big dose of FUD! Actually Linux comes preinstalled from a lot of different vendors. Some are international brands like Dell and Lenovo. There are also some specialized Linux vendors like System76 or EmprorLinux.

Asus also have created a new trend. Fitting Linux in a new niche market, the Ultra Mobile PC market with the Eee PC. HP, Aspire, MSI, among others are fitting these UMPC’s with Linux.

7-There is No Support for Linux

If you purchased your Linux system from a vendor, then there will probably some kind of support. A quick check on System76 or EmprorLinux would verify that. Also if you bought a distribution from Red Hat or Novell then you will also get support as part of the package.

However in reality, a lot of Linux users are mavericks, they get their support from the Linux community. The Linux community is very supportive (at least that is my experience). The Internet is riddled with forums, guides, howtos, blogs, IRC rooms… etc that would offer anybody an extraordinary amount of help. I don’t think that any other operating system has this kind of community. I am sure when it comes to community other proprietary operating systems do envy us!

What people fail to realize that in the case of their Windows preinstalled PC’s, they “just works” because the vendors have already done all the work for them. It would be a totally different ball game if these PC’s had no OS on them. Windows wouldn’t come out all that superior, I would even wager that Linux would probably do a better job.

Actually I think that we are at a point where I can say that Linux would work more than 90% of hardware out there! Could Windows or Apple claim that? I don’t know, I stopped being a Windows power user for quite sometime. But what I remember is that a webcam I purchased in 2004 wasn’t “digitally verified” (or something like that) by XP, despite the fact that XP has been around for years!

9-There is No Office Software, or Software At All for Linux

Huh? Under which rock have you been living under in the past decade? Actually there is more Office software for Linux than Windows and Apple combined. It does 95% of what Microsoft Office can do and you don’t need to loose an arm and a leg to get it, its FREE! And let’s face it, most of us don’t really use Microsoft Office to it’s full potential. So why should I pay 100% for only 10% features I need?

As for the rest of software, rest assured that there is replacement for everything you need. And in a lot of cases these apps get the job done in better ways than their propietary counterparts. And before you say: “Photoshop”, you won’t drag me into this conversation, if you are not content with Gimp, you still can get Photoshop on Linux, so please let’s not get into that.

Bonus: Linux is For Geeks!

Ahh, nevermind not really gonna try to refute this one, though I tried to convince people that Linux is sexy, didn’t really do a good job at it! But hey geek is good ;)