SourceForge is one of the most important entities in the Open Source movement. They manage the geek mecca of slashdot, sell geek paraphernalia that makes all our dreams come true at thinkgeek, manage Freshmeat the mega app hub, and administer over 170,000 Open Source projects at SourceForge.

And if you are a long time Royal HeHe2-ness reader, you should by now realize how I am a big fan of such projects that aim to bring Open Source to the masses; after all it’s the tagline of this blog! This week I bring you an interview with the community manager at SourceForge, Ross Turk. (you can follow him over here on Twitter)

Q-Can you tell us a little more about yourself? You know general stuff?

Sure! I live in West Hollywood, CA, but I spend most of my time traveling around the country (and sometimes the world.) I’ve always been a giant fan of Linux – when I was in high school, I ran the Linux network for a local ISP long before most people thought it was a viable option.

SourceForge used to be called VA Software, and before that it was called VA Linux. When I was hired by VA Linux eight years ago, I got a tattoo of Tux on my arm the week before I started because I knew open source was about to change my life even more than it already had.

In my spare time, I play guitar and bass guitar.

Q- Can you tell us a little more about SourceForge? What other popular websites/projects are managed by you guys?

SourceForge.net provides tools to open source developers so they can build useful stuff. The tools we provide include source code management systems, bug trackers, wikis, web and database hosting, and worldwide distribution, and we provide them freely to anyone who needs them to build open source.

Q-What are your responsibilities at Sourceforge? What projects did you work on? 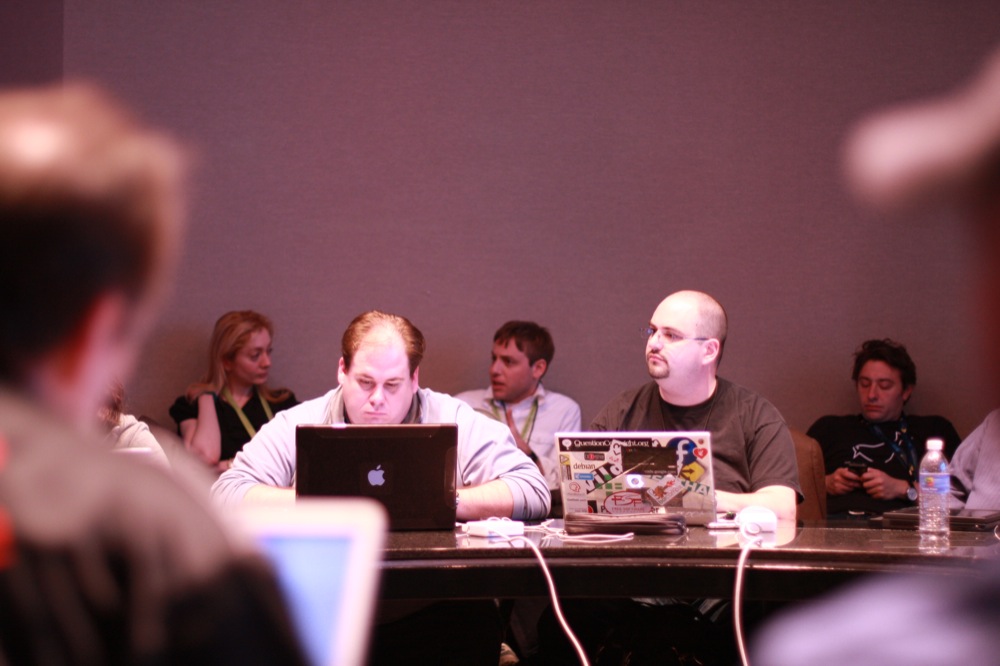 I’m the Community Manager for SourceForge.net, and I’ve been doing this for almost two years. I’ve been with SourceForge for almost eight and a half years now, and I’ve had a lot of various roles, including consulting, architecture, and engineering management. My job now is to make myself available to the SourceForge community of users and developers, make sure they’re happy, and figure out what would make them happier. I spend a lot of time a trade shows, but I also put together programs like the Community Choice Awards so that the entire community can get involved.

I’ve not done much project work, mostly because I don’t have the kind of time I used to have, but I’ve got a project or two on SourceForge that contain some marginally useful bits of technology. !:)

** Q-For Linux and Open Source beginners, can you describe the importance of SourceForge to the community? In what ways does SourceForge help out?**

I feel pretty strongly that the best way to learn about something is to watch it first, then do it. Repositories like SourceForge allow newbies to do both. By hosting all open source projects for free, we allow new innovators to quickly create their own project space and start to attract collaborators. We also enforce transparency in the development processes of the projects we host, so newcomers can lurk on the edge of the community to absorb information before diving in themselves.

There are a lot of ways to contribute to an open source project that don’t involve coding. Have you ever had Firefox crash while you were using it? As awesome as Firefox is, it’s not an uncommon experience if you’re using a preview release. When it happens, you’re shown a dialog box that asks you to provide information about what you were doing at the time. Most people don’t think about it, but by providing that information you are contributing something very useful to an open source project. It’s easy for non-coders to believe that they can’t provide tangible value, but that couldn’t be further from the truth.

So that’s one way: bug reports. Lots of projects don’t make it as easy as Firefox (and they should), but all projects have a way for users to report problems. Most of them also have ways to suggest features you want to see, help educate other users, write documentation, or organize a knowledge base. Sometimes, projects would simply benefit from users telling them “hey, I was able to build this on OpenSolaris under KDE and it works.”

I think perhaps the most successful non-coder contributions, though, are probably language translations. If you speak two languages, most projects have work for you to do!

** Q-There are a million and one new ideas out there, does SourceForge work to attract these ideas to an open model, instead of going on to closed ones?**

We’re a company of pretty fervent believers, but at the same time we all realize that open source is about freedom, knowledge, and pragmatism. It’s our responsibility to educate our users so they understand the consequences of their licensing decisions, and it’s their responsibility to make a decision that will serve them, their users, and society at large.

I do think that we attract a lot of people to open source just by being SourceForge and doing what we do, though.

Q-How can one start an Open Source project on SourceForge? Any tips to help new projects gain attention?

Starting a project is easy. Go to http://sourceforge.net and click on the Create Project link. You’ll need to be logged in to your SourceForge.net account and you’ll be asked some questions about the project you intend to start. An actual human being reviews every project application for quality, so you should be as specific as possible. We work pretty hard to avoid having tons of poorly-defined projects on the site, so we may decline your registration and ask you to resubmit with more data. With over a hundred new projects a day, I think we’ve managed to keep it easy.

SourceForge, over the years, has become almost as much of a collection of ideas as it is a collection of finished, consumable projects. If you’ve got an idea for a project, you should search for it on SourceForge first to make sure nobody else has already begun working on it! If someone else has an idea for a project that solves the same problems you’re trying to solve, you should consider asking them if you can help. They’ll thank you for it.

Q-What does the future hold for SourceForge and the gang?

Nobody can argue that open source has seen a great deal of success at the operating system level with Linux, FreeBSD, and, more recently, OpenSolaris. Similarly, the programming space is seeing a lot of successful open source languages like Perl, PHP, Python, Java, and Ruby. Open source databases like PostgreSQL and MySQL are mainstream now too, as are web servers like Apache and middleware like JBoss.

Clearly, open source is beginning to move up the stack into the application space, and the success of companies like Zimbra, SugarCRM, Zenoss, Hyperic, and Mindtouch are proof that there’s enterprise interest in more than simply keeping the data center running. People want CRM solutions, CMS systems, collaboration platforms, enterprise systems management, and a ton of other types of open source projects that are too numerous to list.

I think this represents a challenge for SourceForge, because this movement will possibly be accompanied by an increase in the complexity of the tools required to build these new projects and an increase in the type of people who might consume what they produce. I also think that as many projects commercialize, they require a completely different set of tools than those we were designed to provide. In short, the open source industry is changing continually and user requirements are changing along with it. We have to listen capably and ceaselessly, maintain a nimble organization, and change what we offer to match what people need (hopefully before they know they need it.)

If you liked this Interview you might want to check my interview with Daniel Campos, a lead developer of the the Extremadura, Spain Linux project. A project that aims to bring Linux to all schools and government offices in the region.