It’s easy to forget with all the source compiling, the conspiracy theories, and the OS flaming (see comment: 102) going on in every corner of the Internet, that there is a fun side of our beloved OS and Open Source applications. I have compiled a list of 10 easter eggs found in Open Source project (actually you will find more than 10 here, as I treated each application as one). So here we go:

I have previously blogged about this, basically if you change the tag title of a song to “Amarok” and the artist’s tag to “Mike Oldfield”, a pop-up OSD will appear saying:

One of Mike Oldfields best pieces of work, Amarok inspired the name behind the audio-player you are currently using. Thanks for choosing *Amarok*!* Mark Kretschmann Max Howell Chris Muehlhaeuser The many other people who have helped make Amarok what it is * 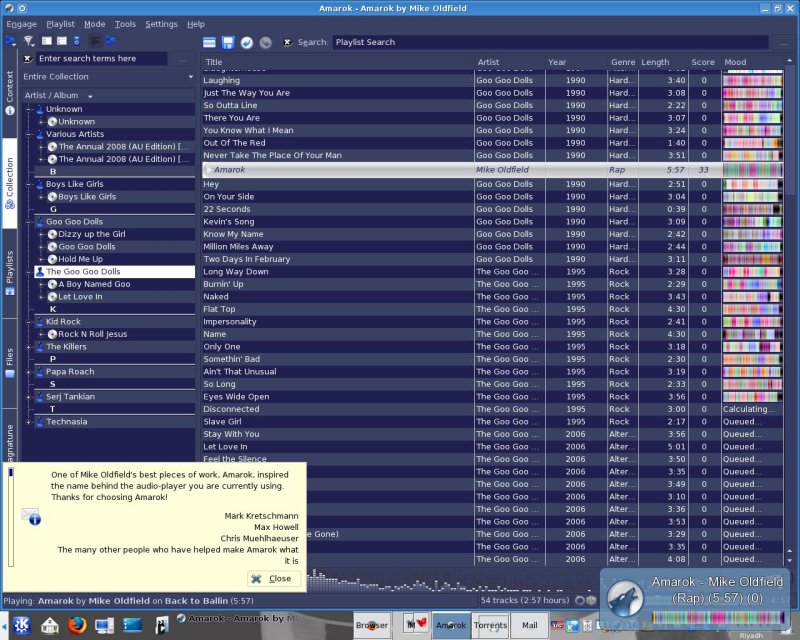 Super Cow to the Rescue!

This easter egg is very well known, but it absolutely needs a mention, after all apt-get is one super package manager that helped us through a lot of difficult nights. This egg is so popular that someone filed a bug complaining that Ubuntu’s Super Cow doesn’t look like a cow, Gentoo’s cow is much better.

You should get the following ASCII drawing:

If I Give You an Easter Egg, Will You Go Away?

The successor of Apt-get, Aptitude, claims that it doesn’t have this easter egg. But did you give up so easily?! Linux users don’t give up damn it! Try the verbose flag, multiple times!

Lulz! A snake eating an elephant! Thats one big ass snake over there!

This command is different from system to system, basically when you get to “linux” press tab to see the different source codes you have. Try different words, fuck, damn, shit…use your imagination. What interesting results could you unearth?

Here is the output of “fuck” on a one kernel of mine:

In GNOME press alt-f2 and then type “free the fish”. Wanda the fish will start swimming around on your desktop! Unfortunately Wanda has been swimming around my desktop for two days now, haven’t gotten around figuring out how drown it (I know I can be sometimes cruel.) 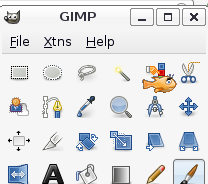 A Jolly Bunch Of Geeks!

Open OpenOffice Writer, then type “‘StarWriterTeam” (without the quotes obviously) and then hit F3. I tried this on Ubuntu, not sure if it works on the Windows or Mac versions, they probably do though. 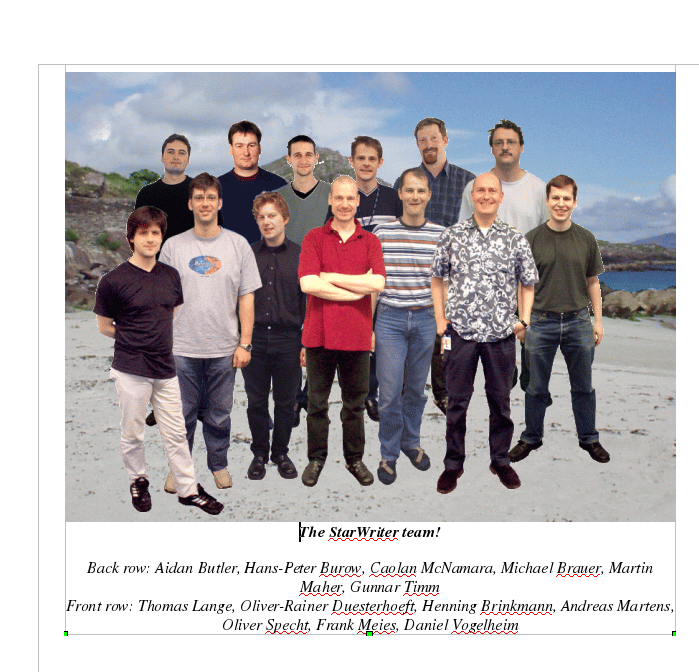 Also, you could open up Calc and type in any cell “=STARCALCTEAM()”. You’ll get the team behind Calc kicking back and having some beers in (Hawaii?)

That Ain’t A Pretty Place! Trust Me

You will need to install first a silly program called cowsay. Which lets you use the apt-get cow to say stuff in ASCII comic style:

This is one of the funniest and greatest easter eggs EVER! In almost all versions of Firefox and even Netscape before that, if you type “about:mozilla” you will get a quote in biblical style! These quotes are actually references to important dates in the history of Netscape and Mozilla. There are 5 official quotes from Mozilla, and an additional intriguing quote in Flock. But there are numerous unofficial versions lying around in the corners of the Internet. 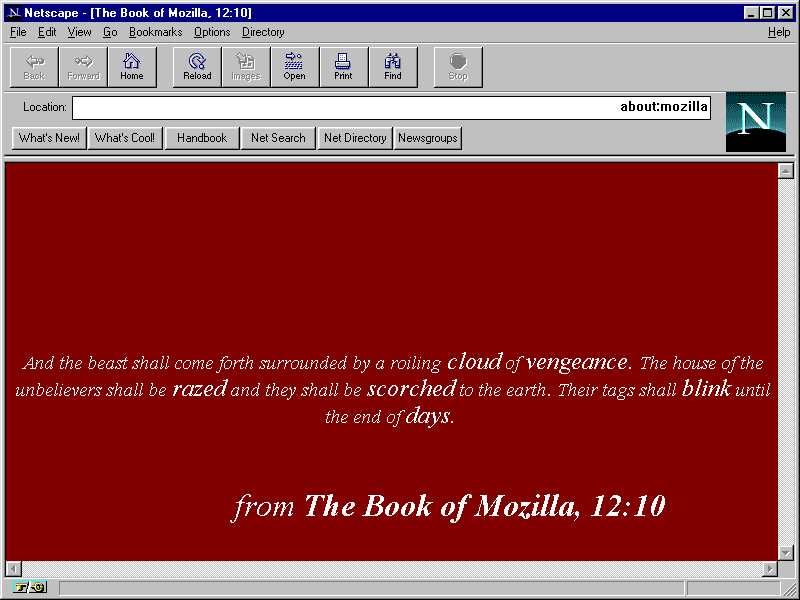 This verse can be found in the first version of Netscape 1.0. According to Wikipedia, this relevation means:

The “beast” is a metaphor for Netscape. The punishments threatened towards the “unbelievers” (most likely users who didn’t conform to standards) are traditionally biblical but with the strange threat that their “tags shall blink until the end of days”. This is a reference the feature in early version of Netscape to blink bad tags, as seen in the source code comments from the Book of Mozilla. 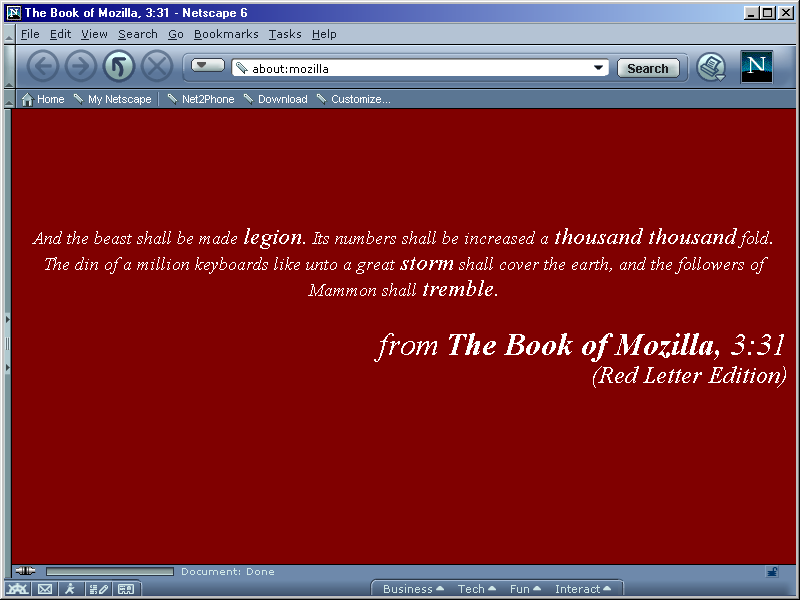 This verse first appeared in May 1998 until October 1998. Then the verse was lost because Netscape was rewritten when it was released as open source. The verse emerged again in 2000. According to Wikipedia this verse means:

Again, the “beast” is Netscape. The text probably refers to Netscape’s hope that, by opening its source, they could attract a “legion” of developers all across the world, who would help improve the software (with the “din of a million keyboards”). “Mammon” refers to Microsoft, whose Internet Explorer browser was Netscape’s chief competition. 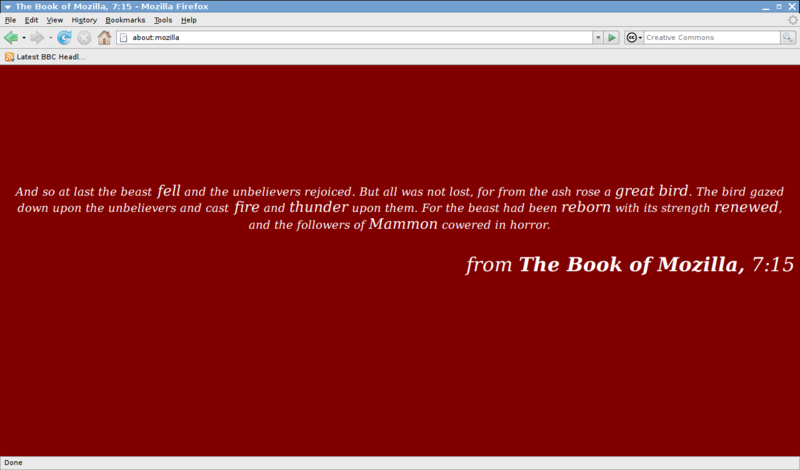 This first appeared in Firefox 1.5 and above, in addition to other browsers such as Camino and Epiphany. This is what Wikipedia had to say about the verse:

The “beast” falling refers to Netscape being closed down by its now parent company AOL. The “great bird” that rises from the ash is the Mozilla Foundation, which was established to continue Mozilla development. The bird rises from the ash like a phoenix

And thus the Creator looked upon the beast reborn and saw that it was good.

This one first appeared in Netscape 9.0 beta, Wikipedia’s interpretation:

The “Creator” refers to Netscape the company. There are two interpretations of the verse: the phrase “beast reborn” appears in the previous verse referring to the Mozilla Foundation and “it was good” could be a tribute to everyone who contributed to the Mozilla project. “Beast reborn” could also be a reference to Netscape reopening their browser division instead of outsourcing development; Netscape Browser 8 was produced by Mercurial Communications.

And when the Beast had taken the quarter of the Earth under its rule, a quarter hundred Birds of Sulfur flew from the Depths. The birds crossed hundreds of mountain views and found twenty four wise men who came from the stars. And then it began, the believers dared to listen. Then, they took their pens and dared to create. Finally, they dared to share their deed with the whole of mankind. Spreading words of freedom and breaking the chains, the birds brought deliverance to everyone.

This first appeared in the Flock social browser which is based on Firefox, according to Wikipedia:

“And when the beast had taken the quarter of the earth under its rule…” is probably a reference to the increasing market share Firefox was gaining over the more popular Internet Explorer. “Birds of Sulfur” references the developmental codename of Flock, which is Sulfur. The “mountain views” references the city of Mountain View, California where the company that produces Flock is based. As this verse is new (version 1.0 was released 5 November 2007), much of the meaning is still unclear, though “they took their pens and dared to create” most likely references to the fact of a lot of blogging, and social networking integration to Flock.

Mammon slept. And the beast reborn spread over the earth and its numbers grew legion. And they proclaimed the times and sacrificed crops unto the fire, with the cunning of foxes. And they built a new world in their own image as promised by the sacred words, and spoke of the beast with their children. Mammon awoke, and lo! it was naught_ but a follower.

This one is the final verse (so far) in the Book of Mozilla, it appeared first in Firefox 3 Beta. The meaning behind this is very clear to anyone who is to speed in the browser wars, but Wikipedia’s interpretation:

“Mammon” is again Internet Explorer, which “slept” for the 5 years between releases. The “beast reborn” refers to Firefox, which gained supporters who self-organized through Spread Firefox, and undertook publicity for the browser, taking out an advertisement in The New York Times and making a crop circle shaped like the Firefox logo. The “cunning of foxes” is a direct reference to Firefox’s name. The “new world” refers to modern, standards based dynamic websites and open source applications. The latter half of the passage links to the Mozilla Manifesto and the about:Mozilla newsletter, and describes Internet Explorer as a follower.

In GNOME press alt+f2 and type “gegls from outer space” This will launch a Space Invader-esque game where GEGLs (stands for Genetically Engineered Goat Large) are trying to kill our beloved fish Wanda! Oh Noes!!! 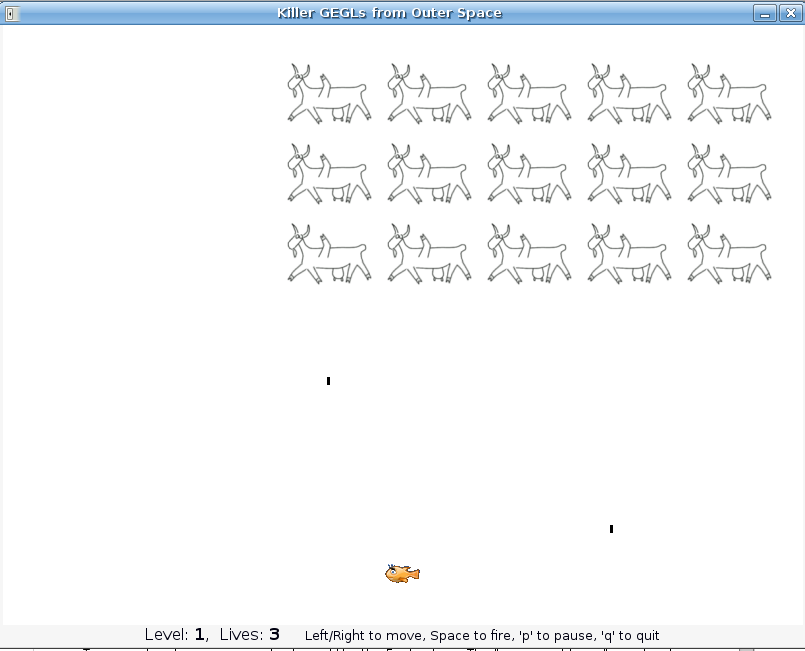 I have given so much to the GNOME desktop, I think I should give some love to it’s compeitor KDE. While I can’t vouch for this, as I don’t use KDE, but it is interesting. According to the KDE developer Jarslow Staniek’s blog, Open up Kexi and create a new table called Sudoku. You will get a little nice game of Sudoku! 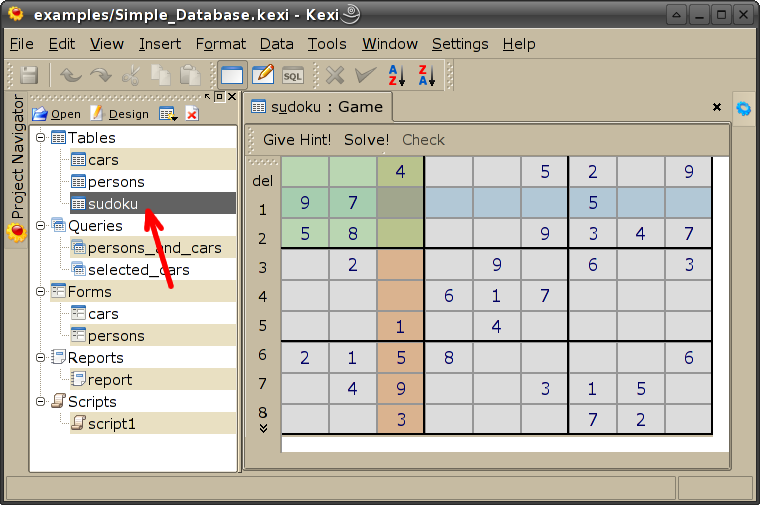